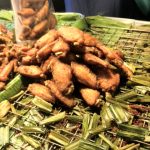 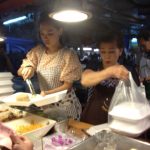 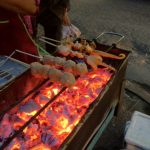 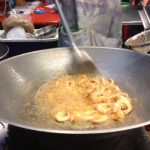 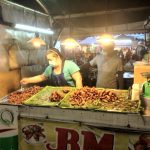 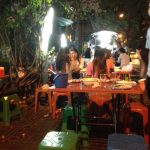 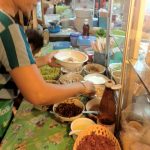 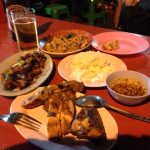 A meal only the streets can deliver 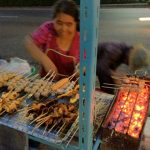 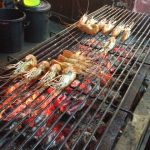 I’m here. It took me a bit longer to get the first blog out, but I promised to share my adventures in Bangkok.

Slowly but surely, I’ve been able to explore the city, which was difficult when I first arrived. The heat—boy was it stifling. It had a way of sucking the energy right from me. I couldn’t stand being outdoors for more than twenty minutes without seeking an air-conditioned building. Luckily, there were plenty of places to escape the heat and the humidity. I’m starting to get used to it and it doesn’t affect me like it first did but still, it’s hot.

Besides writing a book, there was one other thing I wanted to do while living here and that was to indulge in street food. Nearly every road in Bangkok has food vendors cooking on push carts or inside makeshift stands. No lane is too small. No alleyway is too dark. So long as there are people, there are vendors cooking up tasty dishes. Now, I’m not talking about grabbing a plate of Pad Thai here and there. I wanted to go beyond the usual Thai fare. So I arranged to meet with an expert on Thai food, Mark Wiens.

Before traveling to Thailand, I got to know Mark from his two food-centric sites, Migrationology.com and EatingThaiFood.com. When it comes to eating in this city, he’s an expert at it. No one knows or understands Bangkok’s street food scene better than Mark Wien. He told me his travels brought him to Bangkok about two years ago and ever since then, he’s been eating his way through this city one food stall at a time. Check out his channel on YouTube if you don’t believe me. I figured there was no one more qualified to show me around. His last email to me before I arrived read, “We’ll be eating for about four hours. Bring an appetite.” How could I not get excited about that?

Our day started at the Saphan Taskin BTS station where I met up with Mark and his fiancée, Ying. From there we hopped on to one of the many riverboats that ferry the locals up and down the Chao Phraya River. It’s a great way to move about town and avoid the cities notorious traffic.

With a cooling breeze blowing off the river, the ride was not only scenic but provided a nice break from the heat. Along the way, we passed a few of Bangkok’s tourist attractions. Two in particular were the Grand Palace and the Temple of the Lying Buddha. Mark was great about pointing these sights out and talking about them for bit. He was a wealth of information and what few things he didn’t know, Ying, a local, stepped in and cured my curiosities. I should have snapped a few pictures for you but I had gotten so involved in our conversation and the scenery, I forgot. I do hope to get better at this.

Mark’s favorite outdoor market is the Wang Lang Market in the Siriraj distict. It was there that we exited the boat and headed into the crowded maze of shop-filled lanes. He said this market was the best places to try a large sampling of Thai dishes because of the sheer amount of food vendors who show up daily to feed hungry shoppers. No need to traverse the city. Perfect.

We tried two dishes at our first stop. Khao Na Bpet—roasted duck in a sweet soy sauce and Glew Nam—soup with rice noodles, dumplings and variety of pork parts. The duck was perfect and the soup had an intense pork flavor. We were off to a great start with these two delicious appetizers. A half hour later and we were on the hunt for our next meal. 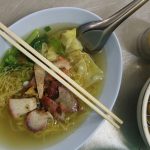 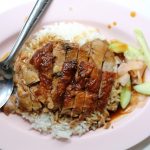 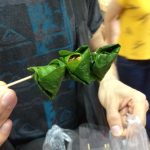 Along the way, we stopped for an interesting snack called, Miang Kam. This was a real treat, something I had never seen or eaten before. Basically it’s a bunch of ingredients you  never would think mix well together. This mixture is then wrapped inside a betel leave to form bite-sized snacks. This particular vendor used the following goodies to make her version of Miang Kam: Shallots, fresh chili, ginger, garlic, lime, roasted cashew nuts, dried shrimp, green mango and roasted coconut shavings. She then gave it a squeeze of simple syrup, mixed it one last time before wrapping a spoonful inside a leaf and skewering it close with a toothpick. Viola! Now the way Mark said to eat this was to pop the entire thing into my mouth and start chewing. So I did that.

The taste was like an explosion of “Wow” on my tongue. Remember when Violet Beauregard from Charlie and the Chocolate Factory ate the three-course dinner gum? Well, this is kind of like that. One minute I was tasting the sweet mango, then suddenly the cashew said, “hello” followed by dried shrimp flavored with roasted coconut and before I could say “Damn” again, I bit into a chili pepper and kicked it up a notch. Makes Pop Rocks candy seem tame. 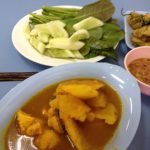 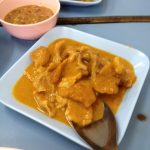 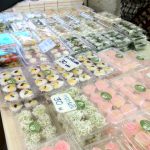 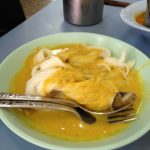 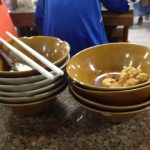 We defeated the noodle soup. 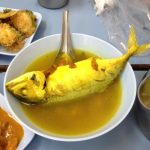 Our next stop had us dinning on food from Thailand’s southern region. The food is known for its extreme heat, as well as dishes featuring a sourness flavor. Mark ordered a large sampling and the eating got underway. We started off with Kanom Jeen Nam Ya, which is basically a fermented rice noodle in a bowl of curry fish soup. Next we tried Tom Som Pla Too, an entire mackerel in a sour soup. The tamarind gives it the orange color, and it was my favorite dish of the bunch. We also had Panang Moo or curry pork and Gaeng Som Saparot, which is a fish and pineapple dish. That one threw me, kind of like pineapple on pizza. There was also a plate of leaves from a cashew nut tree. This was a strange one for me because it had a chalky consistency when eaten yet I could clearly taste a cashew nut. All in all, the dishes were excellent but there was more. We went on to devour different types of boat noodles and slurped down fresh fruit smoothies. We even fit in a visit to a temple during our pig out. Our last meal of the day was a trifecta of refreshing and tasty salads. I say refreshing because we actually ducked into a small but air-conditioned joint. Two of the salads are common in most Thai restaurants in the west but they tasted better here. They were Green Papaya Salad and Larb Moo. Glass Noodle Salad or Yum Woon Sen rounded out the third dish. The salads were a perfect way to wrap up our day of eating.

Stuffed and sleepy from our adventures in eating, the three of us headed back to the Saphan Taskin dock via riverboat. As we said our goodbyes and I thanked Mark for a wonderful time, a fan of Mr. Wiens interrupted us for a picture and to say hello. She had been busy eating her way across the city with help from his Eating Thai Food Guide when she recognized him. It appears I wasn’t the only one taking Mark’s advice.

Well there you have it. I hope you enjoyed my first post from Bangkok. If your travels bring you here and you’re interested in getting a great overview on street food, pick up one of Mark’s food guides from his website, or better yet, book a tour with him. You can’t go wrong either way. Until next time, mai pen rai.